Exactly one month ago I returned home from spending six weeks in Israel. And after six weeks full of places, people, and conversations, I finally had time to reflect, process, and realize that I had a variety of thoughts and emotions coming out in tears and anger that I had no idea were within me. I was a wreck. “How was Israel?” everyone asks. I want to say “So amazing. The best.” And in some ways, it was. Seeing the sites of the bible with my own two eyes. Walking on ancient ground. Israel’s history book, the bible, coming to life. And if I returned home after these first two weeks of touring like almost everyone else who goes to Israel does, I would have been high on cloud 9. But… I stayed. And got wrecked.

I led a month long missions trip with Adventures In Missions, the same organization I participated in and led a squad for The World Race in the past (you can read more about that at http://www.suzannebradford.theworldrace.org).  My team of nine girls and I lived in Nazareth. The question asked long ago, “Can anything good come from Nazareth?” is still the sentiment on many Jewish minds today because it is a predominantly Arab city within a Jewish country. Volunteering at a predominately Arab hospital as well as a playing the part of a 1st century woman at a recreation of a 1st century Nazareth village on the grounds of an excavated synagogue where Jesus spoke were the types “jobs” I did. But none of this is what wrecked me.

Witnessing the effects and hearing the present day stories of the “Holy land” that no longer seems so holy. Living among Arab Christians, who I now call friends, in the midst of a Jewish country that discriminates against them for not only being Arab, but also being Christian. Feeling, touching, seeing, and smelling the difference between the seemingly dominant (for lack of a better word) Jewish country compared to the heartbreak in former Palestine beyond the man-made concrete/barbed wire wall built to separate Arabs in the West Bank and Gaza from the Jewish people in free Israel. These are the realities that broke my heart. 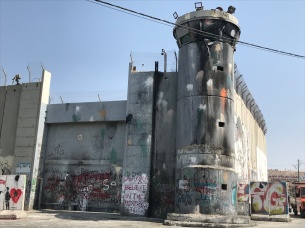 I full-well understand that using terms like “dominant” and “free” to describe Israel are controversial, considering that every country of predominant Muslim Arabs surrounding them would like to see them wiped off the face of the planet and their land be taken over by them because the same land that is holy to Jews is also holy to Muslims. I saw evidence and heard stories of abuse done by the Jewish military to Arabs. Treating them as less than human. I was there during a time when outraged Muslims fought against what they think is unfair by killing Jewish police just outside of the old city of Jerusalem and the former temple. Everything from protests and rage to silent prayer. Witnessing the mistreatment of enclosed and caged in Arabs from the Jewish military and police stuck behind a wall in the West Bank on a Saturday, and walking through the Holocaust Museum and witnessing the atrocities done to Jewish people and the lack of support and aid for so long the very next day on Sunday. 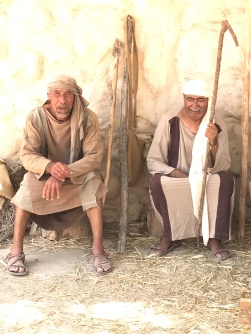 My entire trip felt like conflicting emotions. Past Israel and present Israel. God’s chosen people and their suffering. From being the ones suffering to causing the suffering of others. From being secure and obedient to being rebellious and not even recognizing God’s Son, Jesus Christ, as their Messiah. From loving the land and all that happened there to remembering this is the land where the people murdered Jesus. From God pouring out His love on the people of that land to the war and destruction He caused on that same land. I was seeing words from the book of Romans 9, 10, and 11 come to life.

I’VE REALIZED I AM ANGRY AT GOD

At the end of it all, I’ve realized I’m not okay. I’m angry at God. Why He does what He does. Why He saves some people, and not others. Why He not only allows war and destruction, but often times commands and initiates it. All in all, I realize that I don’t really “like” God right now. Like my mom told me many times growing up, “I’ll always love you, but I don’t like you very much right now.” That’s how I feel towards my Father, the King, in this season. He is walking me through the good tension of what it means to bow to Him because He’s holy and worthy, even if I don’t feel all the feels towards Him. To surrender, even though I don’t like all of His ways. To question Him and be upset, but with respect and reverence. He speaks to me so kindly, “I am still worthy to be praised. Still holy. Still honorable. Still sovereign. Still sitting on My throne. Still King. Still your creator. And not liking everything I do does not change the truth that I am real. I sent my Son, Jesus, to die in your place and save your soul from eternity separated from Me. And I still love you.”. So I have permission to not “like” God right now, but not permission to be disrespectful and withdraw my praise and trust from the One who is worthy. I don’t have to like everything about Him to still believe. Nowhere in the Bible does it say, “Thou shalt like Me at all times.” But He does say that the first and greatest commandment is to “Love the Lord your God with all your heart, soul and mind.” I am learning that I can do this without liking everything about Him and His ways.

And in every stone I cast against the people of Israel, He reminds me of my guilt of the same thing.

“God, why have you chosen them? Don’t you see how they’re treating others?!”
Why did I choose you?
“God, why do you continue to bless them?”​​
Why do I continue to bless you?
“God, why don’t you judge them for their stubbornness and disbelief already?”
​​Why don’t I just judge you for yours?
“God, I just don’t understand Your ways.”
​​No. That’s right. You don’t. And that’s not your job. Let you be you and I’ll be God.

More than any sermon I’ve ever heard, I am finding myself relating to the people of Israel more than ever before. Everything I hold against them for their imperfections, God holds against me for mine. But reminds me that these sins of theirs and mine are exactly why Jesus came from his home in heaven to earth over 2,000 years ago. To live like a man in the city of Nazareth where I lived for a short time. And to die like a criminal… the death of a sinner that I deserved because of my disobedience and going my own way in life. He has paid my penalty. And the penalty for all who believe and call upon Him. As I reflect on my time and all the people I interacted with in Israel, I realize that more than angry, I am broken-hearted. Broken for what the future means for people who think that life is about doing good. Working. Being a good person. Trying hard. And putting faith in themselves for peace, hope, and joy. I know those are found in nothing else than the already finished work of Jesus. A temporary lack of stress or conflict is mistaken as peace. Thinking-it’s-possible is masked as hope. And temporary, fading happiness is confused for joy. But none of these are lasting.

I’ve been broken and raw before God in the past, but nothing like this season. I’ve been upset at Him before, but not like now. And this tension… is absolutely wonderful. A blessing I wouldn’t trade for anything. I am viewing my heavenly Father through brand new eyes as I read His Word as if I just put my trust in Him for the first time yesterday. Meeting Him for the first time. And it is so good.

I AM LEARNING HOW TO STILL RESPECT HIM
IN MY ANGER

As a western church, I am finding that we don’t talk enough about anger towards God and how to handle it. I’m not talking about anger over a situation, a loss, or what He’s done. I’m talking about anger directly towards Him and about Him personally. But how to still respect Him in our anger. I am walking in the possibility of it. David of the Old Testament did it as he wrote many Psalms. Job learned it as he asked “Why?” I’m in good company. I’m comforted that my displeasure with God is okay. He’s walking with me through it.

Maybe you’ve experienced similar emotions and thoughts. Be assured that it’s okay. You’re not the only one. I’m not the only one. And we are not blasphemers and going to hell because we don’t “like” God all of the time. BUT we are never given permission to disrespect Him. Think we know better than He does. Usurp His authority over our lives. Rebel. Turn our back on Him and run away. Choose our own preference over the truth of who He is. At the end of the day, He is STILL God. And we are still called to trust Him. Still believe Him. Still praise Him. And still follow Him. Let’s be people who honor Him through every emotion. Our emotions are great communicators to us of how we are doing.  But they are terrible masters. Let’s feel our emotions, but not be mastered by them.  There is one Master. Let’s fight hard to follow Him.

WANDERING IN A RUNNING WORLD